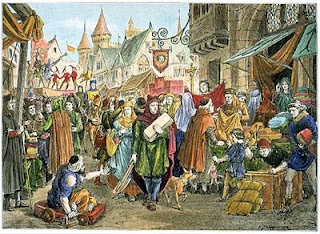 Are you going to Scarborough Fair
Parsley, sage, rosemary and thyme
Remember me to one who lives there
She once was a true love of mine

Tell her to make me a cambric shirt
(On the side of a hill in the deep forest green)
Parsley, sage, rosemary and thyme
(Tracing of sparrow on snow crested brown)
Without no seams nor needle work
(Blankets and bedclothes the child of the mountain)
Then she'll be a true love of mine
(Sleeps unaware of the clarion call)

Tell her to find me an acre of land
(On the side of a hill a sprinkling of leaves)
Parsley, sage, rosemary and thyme
(Washes the grave with silvery tears)
Between the salt water and the sea strands
(A soldier cleans and polishes a gun)
Then she'll be a true love of mine

Tell her to reap it with a sickle of leather
(War bellows blazing in scarlet battalions)
Parsley, sage, rosemary and thyme
(Generals order their soldiers to kill)
And gather it all in a bunch of heather
(And to fight for a cause they've long ago forgotten)
Then she'll be a true love of mine

Are you going to Scarborough Fair
Parsley, sage, rosemary and thyme
Remember me to one who lives there
She once was a true love of mine. 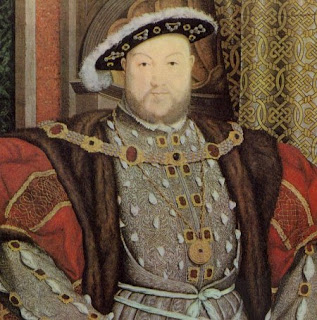 If my name was Peabody and your name was Sherman, then right about now I'd be telling you to get into the Wayback Machine and set the dial for waaaaaay back to merry old England in the '50s...the 1250s, that is. Here we will watch King Henry the VIII sign a charter (in 1253 to be precise) which began the annual tradition of a 45-day fair in the seaside city of Scarborough in North Yorkshire (on the North Sea side of the UK). The charter stated, "The Burgesses and their heirs forever may have a yearly fayre in the Borough, to continue from the Feast of the Assumption of the Blessed Virgin Mary until the Feast of St Michael next following".

For a brief time, the Scarborough Fair was a big deal; however, it wasn't a medieval fair like we picture as a place to go specifically for amusement. Rather, it was an enormous open-air trading center/market that attracted merchants and tradesmen from all over the country. This monumentous occasion drew impressively large crowds. In its heyday, we might say that a trip to Scarborough Fair would be the equivalent of taking a modern-day trip to, say, New York City. It had everything anyone could need, and from August 15-September 29, it was England's hot spot. It was the place to be. Of course, since many hundreds of people from far and near attended to sell their wares, naturally there also came those who sold food and various amenities to those who were far from home. 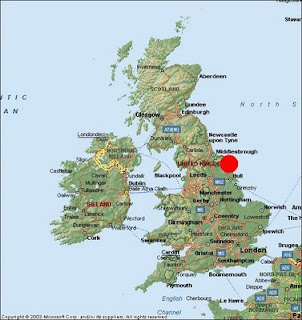 The song Scarborough Fair, was actually not written by Paul Simon and Art Garfunkel. In fact, the song predates them by about, oh, say at least 610 years; the tune and lyrics appeared somewhere around 1300. The song that was sung by this epic duo was actually a song that was written and sung by medieval bards throughout the English countryside. Because of the nature of song at the time, there is no single author credited with the song's inception. It was a folk tune that soon caught on with the local populous, and it became a tradition for the common folk to sing about participating in this auspicious occasion. As is true with most folk music, as time went on more lyrics and verses were added.

Although the song, itself, is a song about jilted love, in that respect it has little value for us. However, it does contain lyrics which do have some historical significance (and you know how we love that around here!) 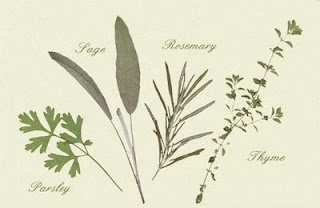 If you know no other words in the song, you at least know the part that says, "Are you going to Scarborough Fair?/Parsley sage rosemary and thyme..." A good herbalist will tell you that Parsley isn't just for making a steak plate look good. It is an herb that is holistically used to treat indigestion. However, during medieval times herbs were believed to have an equivalent spiritual benefit. Indigestion is frequently referred to as "heartburn" because as too many Americans know, it makes the chest hurt in the are near where the heart is found. Due to general lack of understanding the medical sciences, this feeling of indigestion often led folks to believe that their heart hurt. Thus, parsley was prescribed to heal the hurting heart. The herb, Sage, has long been a symbol of strength. Rosemary represents faithfulness, love, and remembrance. The loving Greeks used to give sprigs of Rosemary to each other, and Greek brides traditionally wore a few sprigs of it in their hair on their wedding day. Rosemary, though, is usually symbolic of feminine love because this herb is very tough and strong, but it grows very slowly. Rosemary is also the symbol for prudence and sensibility. Ancient Roman doctors used to put Rosemary underneath the pillow of someone who had to perform a difficult mental job.

In the verses that follow, there is a secondary, simultaneous tune which is sung (you'll find it in the parentheses). The song that is sung here is "Canticle" (which has absolutely nothing to do with Scarborough, a fair, or any culinary herbs). It was written in 1963 by Art Garfunkel and is a re-working of the song "The Side of a Hill" (and is an anti-war ballad). Moving on...

The verses of Scarborough Fair are a list of impossible tasks for the man's sweetie to perform:

Verse 1 - She is to make a cambric shirt with no seams or needlework. This is impossible because cambric is a lightweight cotton fabric that was used specifically for making lace and needlework, so it is impossible because on its own the fabric does not do what it's supposed to. The purpose of requiring cambric for the shirt is so that the shirt will be slightly shiny. The fabric is tightly woven and when completed, it has a slight glossy finish. Cambric is what makes professional playing cards glossy, last longer, and easier to handle. This material wasn't actually available until the 1500s, having been discovered by the French, so this verse was probably not one of the originals. 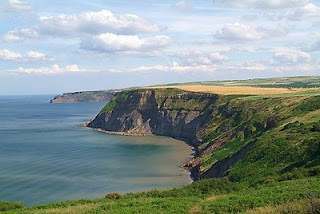 Verse 2 - She is to find an acre tract of land between the ocean and the shore. It is quite obvious why this one is impossible. "Sea strands" was the poetic term used for shoreline or beach. Of course, she could go out and find him an island, but remember that Christopher Columbus did not sail until 1492; so, at the time this song was originally sung, the world as we knew it was flat and to try and go out and find an island of the prescribed proportions would have been suicide...she would fall off the face of the earth.

Verse 3 - She is to reap this one-acre "island" (from verse 2) with a sickle of leather and harvest it all in a bunch of heather. Leather is soft and flexible. A sickle is used to cut down the stalks of grain crops. Basically, she is to cut down all of the crop with what may result to nothing more than the sole of a shoe, and bring it home in bound up in a heather bunch. Heather is a small, compact shrub that grows with tiny, narrow leaves. It doesn't grow on the beach, nor does it do very well in salt water, but it was historically symbolic of luck.

Incidentally, I personally find it amusing that the song ends with a witty barb. It all sounds so lovely and forelorn until we get to the end and the man says, "Good luck!" and that makes me chuckle (considering that this song was intended to be a message passed along to the ex-lady). HA!

***Additional Note: It has been brought to my attention that there are quite a bit more impossible tasks for this good lady to perform before the man will give her the time of day. The tune from which this song and some of its lyrics was borrowed from is much older and pre-dates King Henry VIII. Check out: The Elfin Knight


~finding this information wasn't impossible, but I did have to look hither and yond, including this place:
http://www.geocities.com/paris/villa/3895/
Posted by LivingDedGrrl at 9:31 PM

Thanks for the info. though. This is one of my favourite songs. Scarborough is just around the corner from where I was born and grew up, so we used to hear it before S&G got hold of it.

Also, I think it has older roots. You might like to check out "The Elfin Knight" an old Scottish ballad

Thanks for the info. I'll go check it out! =D

Wonderful Post.
I thought you might enjoy machinima film about the folk song Scarborough Fair
http://www.youtube.com/watch?v=U0b0AcCtnVo
along with my speculative conjecture that this may have arisen from Spencer's poem The Faerie Queene
http://bit.ly/zl4P2L
Best Wishes.

But no one is addressing the elephant in this song! The Canticle lyrics were overlain to to show the futility of war!

In late 1966 Scarborough Fair was number one on the Armed Forces Radio Network (AFRN) until someone actually listened to it. Suddenly it was no longer aired by an obviously embarrassed AFRN. They never mentioned why it was just gone.