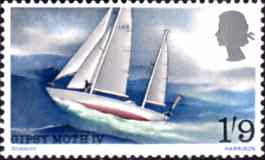 She's gonna slip away below him
Away from the things he's done
But he just shouts 'hey man what you call this thing'
He could have said 'Pride of London'
On a night when the lazy wind is a-wailing
Around the Cutty Sark
Yeah the single handed sailor goes sailing
Sailing away in the dark
"Single Handed Sailor" was released on the Dire Straits CD "Communique" in 1979. In Germany, New Zealand, and Sweden the album went strait to the top of the charts. Lord only knows why this ketch-y little tune didn't get much airplay here in the US. Mark Knopfler wrote this song as a tribute to Sir Francis Chichester, a sailor who was the first (and fastest) person to truly nautically circumnavigate the globe with no crew but himself. 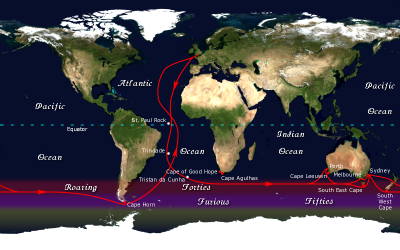 In 1966, Chichester set out from Plymouth, England along the clipper route. The clipper route is the traditional route sailed by clipper ships between Europe, the Far East, and Australia. The route runs through the Southern Ocean in order to make use of the wind system known as The Roaring Forties, located between 40 and 50 degrees latitude. These winds were enough to create rough conditions and sink ships, but they also quickly propelled the clipper ships around the great capes: The Cape of Good Hope (southern tip of Africa), Cape Leeuwin (the southwestern tip of Australia), and Cape Horn (southern tip of S. America). These danger zones became significant landmarks in ocean voyaging. In 1869 and 1914, the Suez and Panama Canals (respectively) made it possible for ships to avoid such southerly travel, which not only saved many lives but also time and money in the delivery of goods; the ships could now sail straight across the globe instead of going all the way around the continents. True global circumnavigation, however, means the sailing vessel rounds all three of these highly dangerous cape areas. Even today, 'round-the-world sailing races incorporate the use of these landmarks, and ironically, despite the installation of the canals, the clipper route is still the fastest way around the world.

A clipper ship is a particular type of commercial ocean-going vessel that is very has multiple masts (means it has lots of sails) and square rigging. The hull of a clipper ship was also quite narrow, but the shape of the rigging and the narrowness of the hull is what earned these ships their name. "Clip" was the English slang term for "to fly or move very quickly". These ships may have been limited in their freight capacity, but they made up for this shortcoming in speed. Chichester's Gipsy Moth IV is only a ketch - a sailing craft with only two masts. This means that while the ship itself is smaller and more easily tossed, it also does not have as many or as large of sails to fill with wind. A yacht's top speed is directly 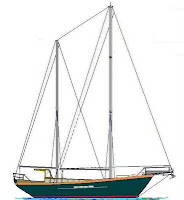 related to it's wetted length. The Gipsy Moth IV was only 53 feet, whereas the clipper ships averaged wetted lengths in the couple-hundred-feet range. The little 53' ketch had a maximum hull speed of only 10 knots, while standard clipper ships averaged lengths of over 100, which meant being capable of more than double the hull speed. So, not only was the little Gipsy Moth IV out sized, out weighed, and out manned, she was also pretty slow as far as clipper ships were concerned (at the time).

Chichester recorded in his log that at Cape Horn, he was rolled in a 140 degree capsize. Good thing his craft was designed to self right. And then he recorded:

"The waves were tremendous. They varied each time, but all were like great sloping walls towering behind you. The kind I liked least was like a great bank of gray-green earth 50' (15 m) high and very steep. Image yourself at the bottom of one. My cockpit was filled five times and once it took more than 15 minutes to drain. My wind-reading machine stopped recording at 60 knots. My self-steering could not cope with the buffeting....I had a feeling of helplessness." 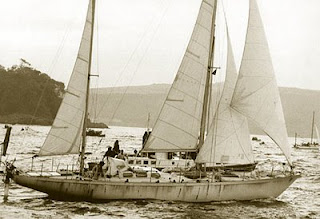 Gipsy Moth IV
Nautical scholars, explorers, and sailors agree that Gipsy Moth IV has to have been the worst racing vessel ever built. Nonetheless it earned Chichester his knighthood and earned the following bragging rights:

-Fastest voyage around the world by any small vessel
-Longest non stop passage that had been made by a small sailing vessel (15,000 miles)
-More than twice the distance of the previous longest passage by a singlehander
-Twice broke the record for a singlehander's week's run by more than 100 miles (160 km)
-Established a record for singlehanded speed by sailing 1,400 miles (2,300 km) in 8 days

Still, Chichester said of it, "Now that I have finished, I don't know what will become of Gipsy Moth IV. I only own the stern while my cousin owns two thirds. My part, I would sell any day. It would be better if about a third were sawn off. The boat was too big for me. Gipsy Moth IV has no sentimental value for me at all. She is cantankerous and difficult and needs a crew of three - a man to navigate, an elephant to move the tiller and a 3'6" (1.1 m) chimpanzee with arms 8' (2.4 m) long to get about below and work some of the gear."

Gipsy Moth IV never raced again after that. When Chichester died, she was put on display in Greenwich, England at a dry dock especially built for two ships that look like a mother and baby. The Gipsy Moth IV is docked with the Cutty Sark, a 212-foot extreme clipper that also ran the clipper race, although at its best it went only from England to China and took 122 days. Despite being the prettier, the larger, the faster, and the more well built of the two vessels, the small, dysfunctional, deteriorating Gipsy Moth IV put all of the Cutty Sark's efforts to shame. 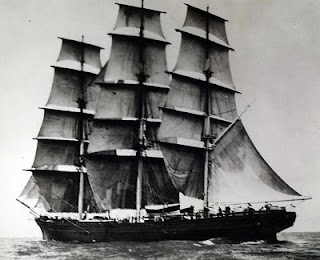 Thank you. Such a great explanation for a great song.