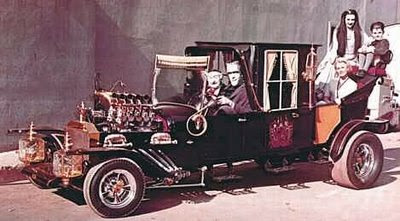 My pappy said, "Son, you're gonna' drive me to drinkin'
If you don't stop drivin' that Hot Rod Lincoln."

Have you heard this story of the Hot Rod Race
When Fords and Lincolns was settin' the pace.
That story is true, I'm here to say
I was drivin' that Model A.

It's got a Lincoln motor and it's really souped up.
That Model A Vitimix makes it look like a pup.
It's got eight cylinders; uses them all.
It's got overdrive, just won't stall.

With a 4-barrel carb and a dual exhaust,
With 4.11 gears you can really get lost.
It's got safety tubes, but I ain't scared.
The brakes are good, tires fair.

Pulled out of San Pedro late one night
The moon and the stars was shinin' bright.
We was drivin' up Grapevine Hill
Passing cars like they was standing still.

All of a sudden in a wink of an eye
A Cadillac sedan passed us by.
I said, "Boys, that's a mark for me!"
By then the taillight was all you could see.

Now the fellas was ribbin' me for bein' behind,
So I thought I'd make the Lincoln unwind.
Took my foot off the gas and man alive,
I shoved it on down into overdrive.

Wound it up to a hundred-and-ten
My speedometer said that I hit top end.
My foot was blue, like lead to the floor.
That's all there is and there ain't no more.

Now the boys all thought I'd lost my sense
And telephone poles looked like a picket fence.
They said, "Slow down! I see spots!
The lines on the road just look like dots."

Took a corner; sideswiped a truck,
Crossed my fingers just for luck.
My fenders was clickin' the guardrail posts.
The guy beside me was white as a ghost.

Smoke was comin' from out of the back
When I started to gain on that Cadillac.
Knew I could catch him, I thought I could pass.
Don't you know by then we'd be low on gas?

We had flames comin' from out of the side.
Feel the tension. Man! What a ride!
I said, "Look out, boys, I've got a license to fly!"
And that Caddy pulled over and let us by.

Now all of a sudden she started to knockin',
And down in the dips she started to rockin'.
I looked in my mirror; a red light was blinkin'
The cops was after my Hot Rod Lincoln!

They arrested me and they put me in jail.
And called my pappy to throw my bail.
And he said, "Son, you're gonna' drive me to drinkin'
If you don't stop drivin' that Hot... Rod... Lincoln

We're long overdue for a good car song - not the kind of song that just happens to mention a car while singing about something else but an song that pays homage to actual, physical, honest-to-goodness American heavy metal. The song was written and first performed in 1955 by Charlie Ryan, and later Johnny Bond recorded the song with some minor changes to the vehicle's specifications. However, the most popular version, which is the closest to the Charlie Ryan recording, was released in 1972 by Commander Cody and His Lost Planet Airmen (and how all of that name fit onto a 45 rpm record label, we'll never know). 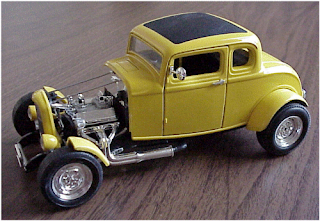 The hot rod race between coupe Fords and Lincolns mentioned at the beginning of the song is a section of southern California's "Ridge Route Highway", which winds over the San Gabriel and Tehachapi Mountains between Castaic Junction on the south. "Grapevine Grade" was a 6 1/2 mile section of Ridge Route Highway that was popular among young American motorists with a need for speed. While many people believe that this highway segment is named because of its many winding turns and switchbacks (resembling a giant grapevine), it was actually named Grapevine Grade because the early wagoners had to cut their way through thick patches of Cimarron grape vines. Even today, while travelling this famous stretch, off the road you will see patches of what appear to be ivy. These are actually Cimarron grape vines that date back to the 1800s. California was the birth place of the hot rod, thanks to the landscape of open country, dry lake beds, and to challenge the vehicle's handling...grades just like the Grapevine. And just like Santa, M&Ms, and The Grapevine, Hot Rod Lincolns do exist.

At the time the races on the Grapevine were popular, the Hot Rod Lincoln was a 1931 Ford Model A coupe over a cut-down Lincoln Zephyr chassis. This Ford had a 12-cylinder Lincoln engine and a 4.11 rear-axle ratio and overdrive. The popularity of hot rod Lincolns gained so much momentum that they even became the getaway vehicle of choice of bootleggers and gangsters. In fact, if it wasn't for the Lincolns, we might not enjoy extensive vehicle modification like we do today - they were the first hot rods; and while this 1931 Ford has plenty of its own specs, it certainly didn't come off the assembly line that way. 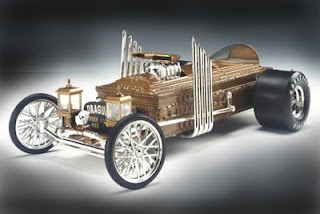 Even while the motor car was in its infancy, gear heads across the country were tinkering with their toys to achieve greater vehicle performance. "Hot rod" was a term that first appeared in the American language around the 1930's and early 1940's. While it's uncertain exactly where it came from, we do know that it specifically refers to the modification of an American car for the purpose of gaining linear speed. The term "hot rod" was the new, hip term to replace "gow job" and "soup-up". One theory behind the term "hot rod" is that it is a contraction of the words "hot roadster".

Traditionally, a "roadster" is defined as a vehicle that only seats two people and does not have a roof, side windows, or a rear windshield. The absence of these features made their bodies light, and because of this (and because of their cool and sporty look) roadsters were a prime target for tinkering with. The early Model A's, however (which is the vehicle specified in our song) had only a single seat for the driver. (Other theories behind "hot rod" include: the practice of leaving the exhaust pipes exposed, which of course are quite hot while the vehicle is running; or referring to the connecting rods, cams, push rods inside the engine, or exposed frame rails of the car).

To increase vehicle performance, mechanics would install larger tires in the rear than in the front, which raised the gear ratio for high speed. Leaving the standard size tires in the front lowered the vehicle to the ground and raked it forward, which decreased wind resistance and made the vehicle more aerodynamic. Mechanics would also cut louvers along the sides and into the hood to release trapped air and to help with engine cooling. 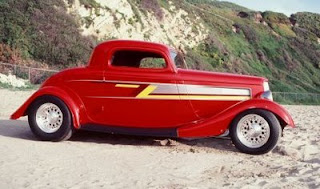 Ford was usually the chop vehicle of choice because their 85-hp engines were being mass produced by the millions. These engines were relatively inexpensive, and their configuration made it very easy to modify, not to mention that this same configuration provided the opportunity for an infinite number of enhancement. One of the earliest modifications to coax more speed out of these Fords was to remove the muffler and straighten out the pipes. Later, multiple carburetors were added on top of that, and the result was an engine that would zip these cars across open country and dry lake beds at speeds of more than 100 mph.

Eventually, the body work caught up with the hot rod engine. Body modifications helped the vehicle's overall handling and performance. A favorite technique was "top chopping", lowering, or channeling the entire frame of the vehicle to within inches of the ground. Seams were frenched (smoothed and filled in) and skirts (smoothed out fenders put over the rear wheel openings). It was also popular to install lakes (exhaust that sticks out the side instead of the back). Of course the car had to look good, so chrome was in abundance as were elaborate paint jobs. However, as the cars got better, the parts got more expensive and junkyard parts just couldn't deliver what the mechanics were looking for. 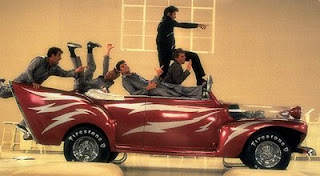 Eventually, Detroit entered the hot rodding arena and began to manufacture normal cars with get-up-and-go --muscle cars. While these cars had more than one seat, a roof, and all of the windows, they were made with huge displacement engines such as the Chevy 396, 409, and 427. Chrysler came out with the 440 and later the 426 hemi, which was racing-engineered (with hemispherical combustion chambers). Of course, the fuel crisis of the 1970s brought an end to the era of the whomping v8 performance engine, which put hot rodding on haitus for almost 20 years. Muscle cars and hot rods rarely saw the light of day except to make an appearance at a special day at the races, a car show, or the slow Sunday drive down Main Street. Hot rodding dwindled and became the hobby of those who could afford it - the parts to build it and the gas to drive it. However, in the 1990's, once again California revived hot rodding among youth. Young Latinos from California's Chicano culture found an interest in the modification of vehicles from the 1960s, particularly Chevy Impalas. Thus, the lowrider was born, and although these vehicles aren't designed around increasing linear speed, the spirit of their design and modification remains true to the character of the hot rod.

Figure out what famous hot rods are pictured? They are (from top to bottom)
1.) Munster Koach, three Ford Model T bodies and a 289 Ford Cobra engine (from the TV series The Munsters)
2.) Milner's Coupe, a 1932 Ford Deuce Coupe (from the movie American Graffiti)
3.) Drag-U-La, a 1964 real coffin (molded from) with a Ford Mustang engine (also from The Munsters)
4.) The original Batmobile, a 1955 Lincoln Futura (from the original TV series Batman starring Adam West and Burt Ward)
5.) ZZ Top's Eliminator, a 1933 Ford Coup
6.) Greased Lightning, an imaginary 1948 Ford (from the movie Grease)

Posted by LivingDedGrrl at 11:52 AM