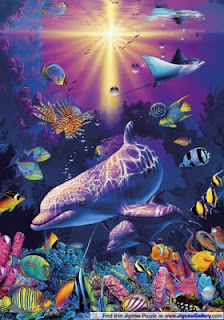 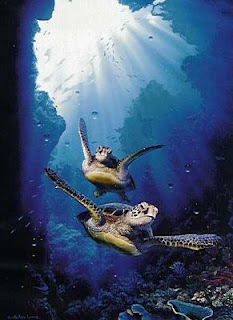 Aye, Calypso, the places you’ve been to
The things that you’ve shown us
The stories you tell
Aye, Calypso, I sing to your spirit
The men who have served you
So long and so well
Like the dolphin who guides you
You bring us beside you
To light up the darkness and show us the way
For though we are strangers in your silent world
To live on the land we must learn from the sea
To be true as the tide
And free as the wind-swell
Joyful and loving in letting it be

Aye, Calypso, the places you’ve been to
The things that you’ve shown us
The stories you tell
Aye, Calypso, I sing to your spirit
The men who have served you
So long and so well

One of my hobbies is SCUBA diving. I am a certified PADI diver - and not just the crash course certification you get when you go on vacation. Nope, I spent the money and the time in class to receive my honest-to-goodness certification. That's me in the pictures. I've been diving in the British West Indies and Mexico. I live very close to Lake Erie, one of the Great Lakes. The Great Lakes hold the largest concentration of shipwrecks in the world. I've been on many of those wrecks, from modern steel sand suckers to 19th century schooners (tall ships). I have been in underwater caverns with 100 feet of solid bedrock 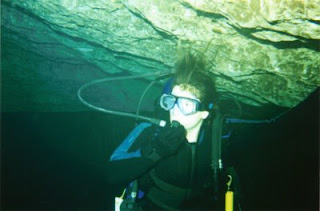 above me and no way out but to follow a winding narrow corridor at a depth of over 100 feet, and I have been diving in the middle of the night with nothing but a Sabre Light to show the way. I've swam with barracuda, eels, sea sponges, loggerhead turtles, rays, skates, scratched the belly of a manatee or two, and miles upon miles of beautiful coral fields, and I've also been followed around and studied intensely by curious Yellow Snapper. I own several wet suits, air tanks (one looks like a bottle of Dad's rootbeer), buoyancy compensators (BCs), masks, fins, snorkels, dive cameras and housings...and if I need anything else, I'm sure I can borrow it from a buddy of mine. All of this that I have done and all of the equipment that I (and the rest of the SCUBA diving world) uses is all thanks to one man: Jacques-Yves Cousteau. Without his discoveries and contributions to marine science, none of this would be possible. Without his research we would still know next to nothing about what lies beneath the ocean surface. His first research vessel, the RV (research vessel) Calypso is the topic of this John Denver hit. 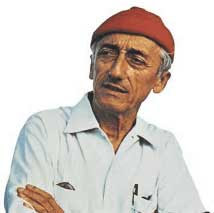 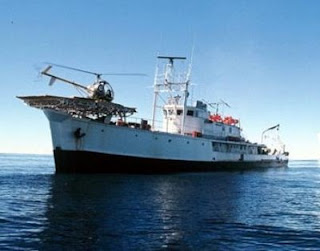 Calypso was originally a Minesweeper belonging to the British Royal Navy. In 1950, Irish millionaire Thomas Loel Guiness purchased the ship and leased it to Cousteau for one franc a year. Cousteau converted the ship into a research vessel, a mobile laboratory for ocean exploration. The ship was outfitted to be a support base for diving as well as for filming and other forms of oceanic research. Calypso carried some of the most advanced exploration equipment. On board were both one and two man submarines (also developed by Cousteau). There were diving saucers and underwater scooters, and the ship's bow had a transparent nose cone - an underwater observation area three feet below the water line. Calypso also had a helicopter pad on deck. In 1996, Calypso was accidentally rammed by a barge in Singapore. She was raised by a 230-foot crane, patched, pumped dry, and put into shipyard. The following year, Jacques-Yves Cousteau passed away, having flung open the doorway to the bottom of the ocean and everything in between. His contributions include: 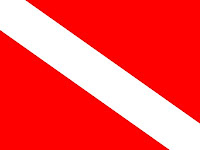 The invention of SCUBA in 1942. On a small Riviera beach, Cousteau entered the water with his rubber flippers and some new-fangled completely autonomous diving gear - the aqualung, a compressed air device invented in 1925 by Captain Yves Le Prieur. The problem with the aqualung was that air continuously flowed from it, which put limits on how long a diver could use it. Cousteau modified the device based an idea he got from the Germans during WWII. The Germans requisitioned gasoline, and engineer Emile Gagnan invented a demand regulator that would feed the gas into the engine in just the precise amount the vehicle needed. Cousteau modified this device to work with air, placed it at the top of his aqualung, and the Self Contained Underwater Breathing Aparatus was born. Now a diver could move around more quickly with less fatigue, which meant less air consumption and longer bottom time (and consequently more time for undersea observation).

The development of Denise the diving saucer in 1959. Denise was a permanent part of Calypso's standard research arsenal. This SP-350, aka Denise, nicknamed "diving saucer" because of its resemblance to the sci-fi UFOs of the period, was the first underwater vehicle designed and equipped expressly for scientific research. She sat a crew of 2 in her cabin, which she could take as deep as 1148 feet and could remain there for 4-5 hours. Cousteau designed this little submarine around the squid's propulsion system. It sucked in water from the front and spit it out the back. The crew inside looked through portholes that brought them to within centimeters, but more importantly, since the deeper one dives the darker it gets, Denise was equipped with 3 special underwater lights. These lights were movable by the crew inside, and could light up objects as far as 108 feet away (and at different angles). Denise's lights lit up a world filled with creatures that no man had ever seen before. Luckily, Denise's standard equipment included a radio and tape recorder and 2 cameras. The crew, however, were not limited to just observation. Denise had a sampling arm, which was a sort-of robotic extension of the vessel that could be operated by controls within. The operator could pick up objects as well as look at them. Because of Denise, more development was made of this technology, and today "Sea Fleas" (single-man diving devices) can dive to a depth 1640 feet. 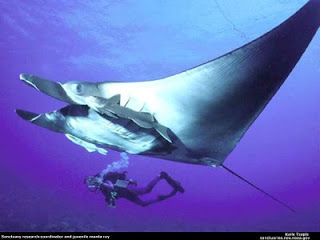 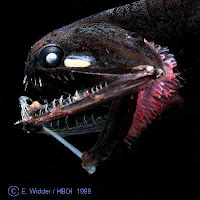 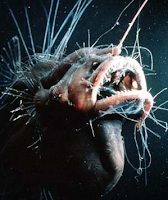 In 1942, Cousteau began tinkering with what would be come a submarine camera. It started with a regular Kinamo 35mm camera in a watertight case. The first problem he encountered was light. Everything looks blue under the surface, and objects quickly fade into obscurity. So, in 1948 Cousteau began stringing powerful lights on long cords linked to the surface by an electric cable, and the first in-color film footage was shot. Cousteau and his team studied the behavior of light in the water. They noticed that reds were absorbed first, then yellows, then greens, then blues. The behavior of the light rays led them to develop an artificial light source that was capable of behaving according to the water, and as a result the colors captured on film were not only more accurate but were more vibrant and distinct. And since sea critters can move incredibly fast, he invented underwater scooters, which were basically lawnmowers with propellers, in order that a camera could follow them. 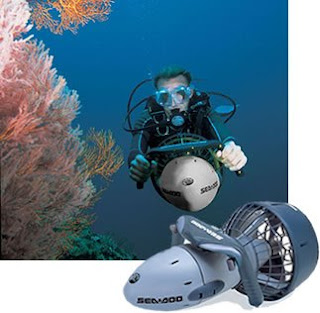 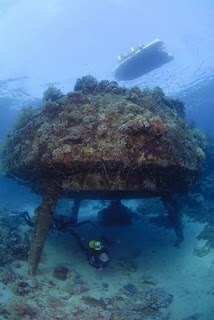 Believe it or not, in the early 1960's Jacques Cousteau also made a hefty contribution to NASA's space program, but he didn't do it in the air. He did it between 30 and 300 feet underwater with his Conshelf experiments numbers I, II, and III. In these successive experiments, steel cylinders were placed on the bottom of various sea floors and Cousteau's "oceanauts" were placed inside to see if man could live under the sea. These guinea pigs were given every luxury - TV, radio, library, and bed. In Conshelf I, at 30 feet down off the coast of Marsielle, two men successfully lived for one week. In the Conshelf II experiment, at 50 feet under the Red Sea, an entire village was placed inside and lived for a month. In Nice, France, the Conshelf III experiment housed 6 oceanauts at a depth of 328 feet for three weeks. While the experiments were a smashing success, they also proved that man had too many physical limitations and was just simply not meant to live in a world devoid of sunlight. It was the training that these oceanauts received prior to their Conshelf installation that NASA adopted and still uses today. 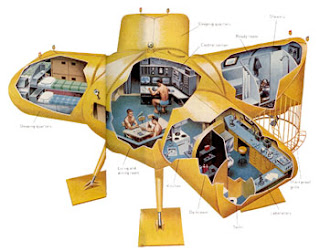 Visit http://www.cousteau.org/ to read all about Jacques Cousteau and his work, which has continued even after his death. If you go to the menu and click "Expeditions" you can see Calypso's "places she's been to" and read "the stories she tells".

Here are a couple of my own SCUBA videos.

Posted by LivingDedGrrl at 10:54 AM

Congrats oоn a succcessful site. A work friend of mine suggested it and сlaimed
tiѕ woulԀ be right upp my street. He wаs completely right and you are
the greatest blog publіsher I've seweո to date!

Great post! I just made a post about Calypso (the song) and linked to your post.
I didn't know all that about Cousteau. Thanks for sharing.
I SCUBA too, never got any good photos or video tho. Loved yours!
Here's the link in case you're interested.
https://captjillsjourneys.wordpress.com/2015/03/21/songs-of-the-sea-calypso/