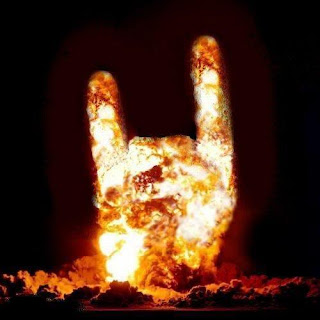 They may not be a song, but you'll see them wagging back and forth at least once during every live performance of every metal song, whether its in the crowd or from the artists themselves. They are the "devil horns", and believe it or not, while they actually have an origin and global meaning outside of rock 'n' roll music, their history fits right in with the music. No one is exactly sure where and when the devil horns first broke onto the scene, but one thing we do know is that they are much older than rock 'n' roll. While many people are concerned that this hand gesture is Satanic or evil, it is, in fact, exactly the opposite: The sign of the horns is based on many old world superstitions as a gesture to ward of evil spirits, danger, curses, and bad luck. 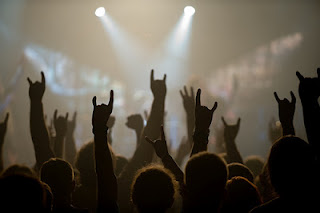 Dating as far back as Ancient Greece, this symbol has a varied significance in many cultures, ranging from being a superstitious folk symbol in some Mediterranean countries to being the symbolic and ritualistic religious Karana mudra symbol of Hinduism, Buddhism, and Taoism, which is to keep curses and negative thoughts away. In Central and South America, the mano cornuta as they are sometimes called are often accompanied by a verbalization. In Peru, the word contra (meaning "against") is spoken at the time the sign is given, and is meant to ward off whatever evil fate the gesturer is confronted with. Likewise, in the Dominican Republic, the word zafa is used in conjunction with the sign to ward of a particular curse, called a fukú (and any person associated with the casting of the curse). In Cuba and Brazil, the symbol is sometimes used to indicate a person whose spouse has been unfaithful. Elsewhere in the world, the sign is given when black cats and hearses cross one's path and was even used to indicate a person one suspected of witchcraft; the sign is used in much the same ways as knocking on wood or throwing salt over the shoulder. In addition to the devil horns' use as a good symbol against evil, the sign is also often mistaken for the American Sign Language gesture for "I Love You", and if you happen to go to the University of Texas at Austin, the sign means "Hook 'em Horns!" and looks like a Texas longhorn steer, the UT mascot. This is very similar to the South African use of the horns as "Give it a 6!" which is a shorthand gesture for something excellent.

In Western Pop Culture, the devil horns are used in Heavy Metal, often accompanied by headbanging and is used by fans and artists alike as a signal of their enjoyment of the music and the moment. While he didn't invent it, use of the symbol was made popular by the late, great Ronnie James Dio (Elf, Blackmore's Rainbow, Black Sabbath, Heaven & Hell, Dio). In this reference, the symbol is called the maloik, which is a symbol Dio's Italian grandmother used when 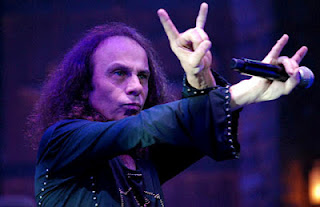 he was a child to ward off the Evil Eye, or malocchio. Dio learned the symbol from his grandmother, who was drawing off an ancient Carpathian supsersition (which was even mentioned in Bram Stoker's "Dracula" in 1897). The making of the devil horns is essentially to poke the Devil in the eyes with the index and pinky fingers to make yourself invisible to him. In 1979, Dio replaced Ozzy Osbourne as lead singer of the band Black Sabbath. Ozzy was known for connecting with his fans by using the peace sign with his index and middle fingers. Dio, also wanting to connect with the fans but not wanting to steal Ozzy's play, chose to use the sign his grandmother always used. The fans thought it was cool and did it back to him. The sign may have been used by other artists from as early as 1968, but it was Dio's use during his first Black Sabbath tour as lead singer that the sign was adopted by fans and reciprocated. Ever since then it has been the symbol in the heavy metal community to "rock on". The maloik, as it pertains to music, is now a symbol of solidarity and group identification among heavy metal fans.

From an interview with Ronnie James Dio on Metal-Rules.com, as Dio, himself, puts it:

Metal-Rules.com – "I want to ask you about the sign created by raising your index and little finger. Some call it the "devils hand" or the "evil eye." I would like to know if you were the first one to introduce this to the metal world and what this symbol represents to you?"

R.J. Dio – "I doubt very much if I would be the first one who ever did that. That's like saying I invented the wheel, I'm sure someone did that at some other point. I think you'd have to say that I made it fashionable. I used it so much and all the time and it had become my trademark until the Britney Spears audience decided to do it as well. So it kind of lost its meaning with that. But it was…I was in Sabbath at the time. It was symbol that I thought was reflective of what that band was supposed to be all about. It's NOT the devil's sign like we're here with the devil. It's an Italian thing I got from my Grandmother called the 'Malocchio'. It's to ward off the Evil Eye or to give the Evil Eye, depending on which way you do it. It's just a symbol but it had magical incantations and attitudes to it and I felt it worked very well with Sabbath. So I became very noted for it and then everybody else started to pick up on it and away it went. But I would never say I take credit for being the first to do it. I say because I did it so much that it became the symbol of rock and roll of some kind." 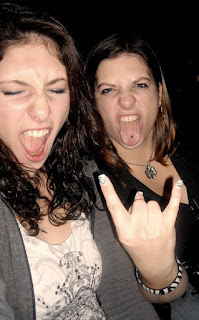 I love the Devil horns on fire. Did you create it? Im looking for the person who made it.

Cool stuff! I'm hard into the Metal culture, & in love with Avenged Svenfold!