Nothing they could do but sit down there
with the black coal all around them,
and the water rose so quick and cold,
an unlikely place to drown.

They lashed themselves together
so in death they might be found
and prayed there for a miracle
some 24 stories down.

Down, down, down in the ground. 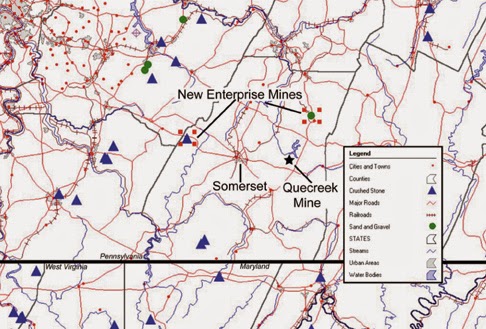 Few events since the safe landing of the Apollo 13 have caught the world's attention and emotion and ended with such a positive uplifting finale than the 5-day rescue attempt that followed the Quecreek mining disaster of 2002. From July 24 through 28, 2002, nine coal miners were trapped for 77 hours in the Pennsylvania mine. All survived. And of course, the champion band of the working man, Dropkick Murphys, who have a history of chronicling the events of blue collar workers, made sure to immortalize the event on their 2003 album, "Blackout". 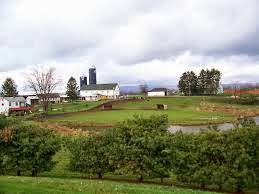 Rolling pastures and quaint farm houses dot the landscape of rural Pennsylvania like images by Currier & Ives, and in this sprawling Midwestern bucolic expanse of farm and field lies Dormel Farms, the very picture of Americana. Yet juxtaposed beneath the romantic spread of fruit orchards and sugar camps lies a different scene: an expanse of rock, heat, and dust, long hours of darkness, and danger. On the evening of July 24, as workers began to extend the shaft of the Quecreek mine, which lie just beneath the picture of heaven that is Dormel Farms. They had no idea that they were about to find themselves trapped in a hell underneath. 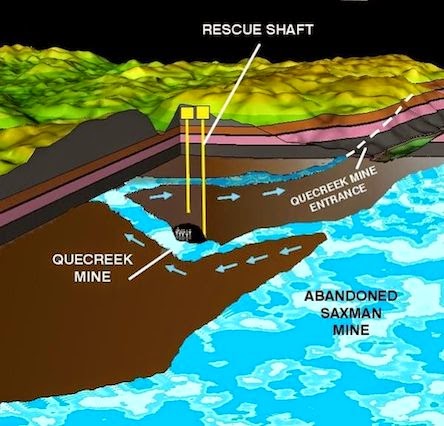 The scene in which this story unfolds is typical of an area rich with resources. Often the landscape is unmarred and remains pristine in its appearance while tunnels and shafts riddle the area below. Pennsylvania is no stranger to mining operations, and it is not uncommon for one mine to close for various reasons and for another to be opened in fairly close proximity. Each shaft is carefully plotted, mapped, and recorded with the county as a reference for future digs. However, the method is not fool proof, and on July 24, unbeknownst to anyone, the Black Wolf Coal Company accidentally dug into the adjacent abandoned, poorly documented Saxman Coal/Harrison #2 Mine (last worked in the 1950's), which was underwater, flooding the room and Quecreek pillar mine with an estimated 50-60 million gallons of water. Two hundred and forty feet under solid bedrock, ice cold water inundated the 4x4 foot chamber in which
nine men were working, blocking the entrance and any path of escape. Immediately, they used the mine's telephone system to warn the 2-Left panel workers, who were able to evacuate safely. The nine who saved their lives, however, would not be so lucky and would spend the next 77 hours trapped 24 stories below ground in a pillar shaft with nothing to do but pray. Struggling to stay alive, the nine tried desperately to escape the flood by climbing a 4-foot wide, 3000-foot long safety shaft, only to find that it, too, was flooded. The water continued to rise through the night and into the next morning. On the surface, rescuers scrambled to find a drill that could bore a hole large enough to raise the men from the pit. 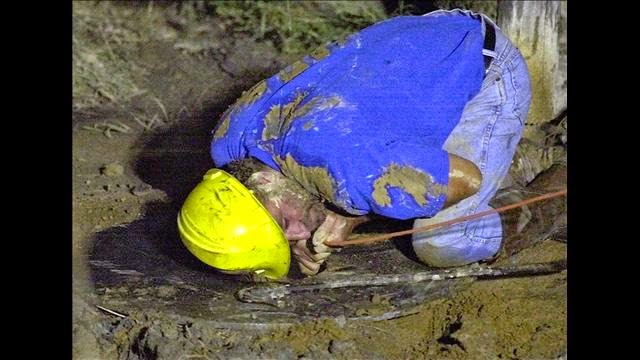 Flooding is a common occurrence in mining operations, and all mines are equipped with pumps. Immediately, the pumps began the race to draw the water out of the shaft faster than it could enter. The more water that entered the chamber and shaft, the less air there was for the nine men to breathe. A second operation began immediately to bore an air vent straight down from the surface into the tiny chamber. It took nearly two hours for the vent to be completed, but even though the miners could breathe, rescue monitors indicated that the water was still rising and threatened to completely fill the chamber in which the miners had sought refuge. They were running out of time. Desperate times call for desperate measures, and an untested theory was put to work:  If a pressurized air pocket could be created, it would slow the water flow and allow the pumps to catch up and perhaps even get ahead of the flood. The theory had never been tried before, and after a few calculations, air was sent rushing down the vent and into the chamber. The sound was deafening. The pressure hurt the miners' ears, but they didn't care. It gave them hope knowing that people knew exactly where they were, which raised their odds of survival, and their spirits. 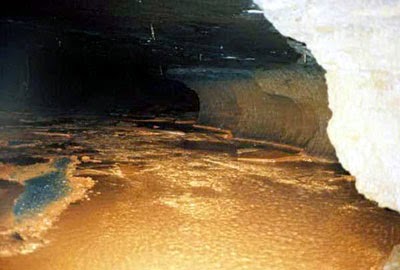 By 9am Thursday morning, the water had already filled the entire mine just short of a few feet from the
entrance. The only thing keeping the miners alive was the pressurized air pocket that had been created the night before, but that couldn't stand long. More pumps were brought in to lower the water level, but it wasn't enough. A second entrance shaft would have to be dug to retrieve the men, but it would mean a coin toss:  If the water level wasn't low enough and the drill penetrated the mine, the air pocket would be lost and the miners would drown. By Noon, however, the water level had risen high enough to force the men 300 feet from their only air source, and the air quality within the shaft was beginning to deteriorate. If they don't drown, they'll suffocate. Crew Chief Randall Fogle, trapped below with his men, estimated they had only one hour left to live. He and his men said their prayers and wrote their notes. Then the men lashed themselves together to die as a family. If they were going to die together, at least they would all be found together. 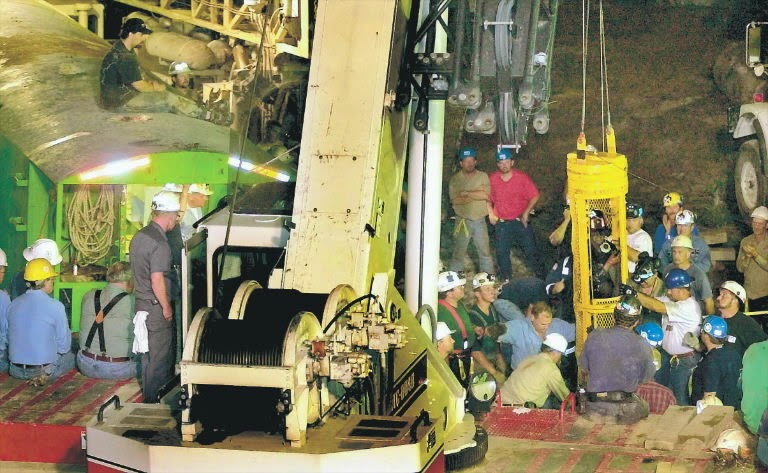 Rescuers, however, did not give up, and on Thursday afternoon, the pumps had caught up with the flow, and
the water was reported as having leveled off. The trapped crew within, however, soaked and hungry, now fought for survival in the frigid 50 degrees 24-stories beneath the Earth's surface. With the water stilled, a 30-inch bit was located in W Virgina and was given a police escort to the site. The men inside could hear the bit coming closer, but as Crew Chief Fogle began to encourage them, certain of immanent rescue, suddenly the sound of drilling stopped. The drill bit had broken at 139 feet. It was now Friday. While it is not uncommon for bits to break, when it was retrieved and a second attempt forthcoming, it was discovered that a piece of the bit was lodged in the new shaft, and drilling was now impossible. A special tool would be needed to dislodge the broken piece so that the operation could continue. Building this implement takes 4-5 days, but realizing the urgency of the situation, a 95-man machine shop in Jefferson County built one in three hours. The tool was flown to Dormel Farms by the National Guard. After an 18 hour delay, drilling resumed. Again, the bit broke, along with the miners' spirits. Randall Fogue continued to hold his men together, confident of a rescue. A third bit was brought in. Finally, after many equipment failures and errors, the rescue shaft was complete. 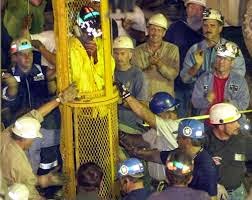 Rescuers communicated with the trapped men by tapping on the air vent pipe, and were ecstatic to hear a faint return tap from the men below. All nine were alive and well. On July 28, a mesh rescue capsule with supplies was lowered into the rescue shaft. The men were given instructions to enter the capsule one at a time to be raised from the pit according to weight. Squeezing into the tiny 24-inch capsule, Randall Fogle was the first to be rescued. The ascent was slow, and on the surface 10 hyperbaric chambers awaited the men, who now faced a danger of decompression sickness from their lengthy stay at depth with pressure. However, at 2:45am on July 28, all nine miners were on the safe on the surface. None of them sustained injuries past a treatable bout of hypothermia and some chest pains.

In the aftermath, it was determined that the primary cause of the water inundation was the use of an undated and uncertified mine map of the Harrison No. 2 mine that did not show the complete and final mine workings. The rescue attempt could have been much more serious. If Fogle had not alerted the other nine miners, they too would have been trapped. His quick thinking and encouragement kept his team together, and their togetherness as a team in finding escape routes and procedures is what ultimately saved them all. All nine have sold the rights to their story to the Walt Disney Company, and they lived happily ever after.

The miners, in order of their rescue are: 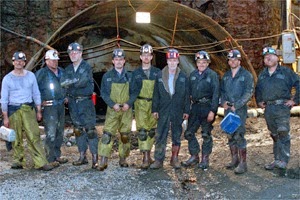