While riding in my Cadillac,
What to my surprise.
A little Nash Rambler was following me -
About one third my size.
The guy must�'ve wanted to pass me up
As he kept on tooting his horn. Beep! Beep!
I�ll show him that a Cadillac
Is not a car to scorn.
Beep! Beep! Beep! Beep!
His horn went beep beep beep!

I pushed my foot down to the floor
To give the guy the shake.
But the little Nash Rambler stayed right behind;
He still had on his brake.
He must have thought his car had more guts
As he kept on tooting his horn.
I�ll show him that a Cadillac
Is not a car to scorn.
Beep! Beep!
His horn went beep beep!

My car went into passing gear
And we took off with gust.
Soon we were doing ninety -
Must�ve left him in the dust.
When I peeked in the mirror of my car,
I couldn�t believe my eyes:
The little Nash Rambler was right behind -
I think that guy could fly.
Beep! Beep! Beep! Beep!
His horn went beep beep beep.

Now we�re doing a hundred and ten -
This certainly was a race.
For a Rambler to pass a Caddy
Would be a big disgrace.
The guy must'�ve wanted to pass me up
As he kept on tooting his horn.
I�ll show him that a Cadillac
Is not a car to scorn.
Beep! Beep! Beep! Beep!
His horn went beep beep!

Now we�re doing a hundred and twenty -
As fast as I could go.
The Rambler pulled along side of me
As if we were going slow.
The fellow rolled down his window
And yelled for me to hear,
�Hey, Buddy, how can I get this car
Out of second gear?! 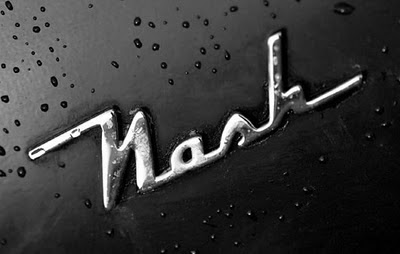 In 1952, three students from the University of Connecticut took their comedy show on the road. Within four years, they shed the name "The Nitwits" and transformed themselves into a musical group called "The Playmates". On July 9, 1958, they scored their first big hit with "Beep Beep". Their surprise novelty hit rocketed to #4 on the Billboard Top 40 and became a regular spin on the Dr. Dimento Show. It sold over 1 million copies and went gold. Just as their hit was an innovative novelty, so was the subject matter. "Beep Beep", the song's official title, is subtitled "The Little Nash Rambler".

In the 1950's, the Nash-Kelvinator company realized it needed to be more competitive in the automotive industry, and it's president insisted that the next car to roll off the assembly line had to be innovative - different from the other manufacturers' offerings. The result was The Rambler. Originally named the Diplomat (but changed after Nash learned that Dodge had already reserved that name), Ramblers were designed to be smaller than contemporary vehicles while still able to seat five people comfortably, and while this song may have eventually faded into history, the Rambler's did not: Nash Ramblers revolutionized the modern auto industry - they were the first modern American compact cars. 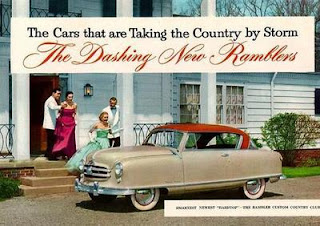 Nash Ramblers rolled onto the market in the model year 1950 and gave Ford, Chevy, and Plymouth a run for their money. For the Nash-Kelvinator company, the strategy was efficiency. In 1950, the Rambler was a new car, but it cost significantly less than others in its class. Of course, there was no "compact car" class at the time, so it was considered as one in the category of the competitor's "economy" models. The efficiency strategy was a huge success for Nash. Because of their smaller size, Nash could save on assembly materials, and they could pass that savings along to their customers. An added benefit to the smaller body size was that the car used less fuel than it's hulking competition, and so it was more economical to drive. 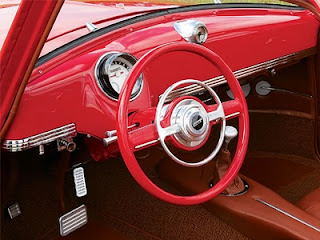 The introduction of the style couldn't have come at a better time: Americans had been exposed to European mini cars during news coverage of WWII, but Americans already knew that "economy" doesn't always mean "quality". The Nash company wanted to make sure that their new vehicle wasn't perceived to be a "cheap little car", so when it was released, Nash only offered the car as an upscale sedan that they called the "Landau" edition. To help with image (and subsequently sales) the Rambler came very well equipped. Ramblers had a 100 inch wheelbase and the 178 cubic inch (2.8 L) flathead Straight-6 cylinder 82 hp engine was already respected in the automotive industry. The options weren't bad, either. Coming standard on the Rambler were: whitewall tires, full wheel covers, an electric clock, and even a push-button AM radio, which was way more than the standard options being offered by the competition. Nash's Rambler changed not only the concept behind 2-door coup design, but also that of the sedan, convertible, and family wagon, which came later in the Rambler years.

And of course as far as the song is concerned, Rambler vs. Cadillac is a great David & Goliath story. Although not specified in the song, at the time of the Rambler's introduction the Coup deVille was the most powerful and most popular of the GM Cadillac line. Of course, the Caddy was much more expensive, and it had a 330 cubic inch v8 engine...which was nothing to scorn...but scorn the little v-6 Rambler did...and it kept right on going, it's compact design ideas traveling well into the 21st century. 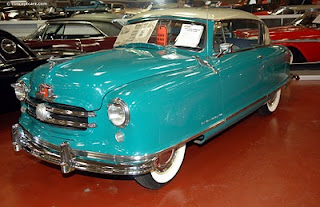 Posted by LivingDedGrrl at 1:09 PM

Car songs are some of my favorite. Dead Man Curve and all of the Beach Boys/Jan And Dean. Have you heard Bringing Mary Home or Strange Things Happen in This World? Very cool and a little strange. :)
Colonel Robert Morris
Rockabilly Hall Of Fame

The story behind the song is based on a little-known mechanical fact about the "little Nash Rambler" cars. They could be ordered with an optional electrically-operated overdrive system, triggered by a switch on the shift lever. Due to a design flaw on earlier models, once the overdrive was engaged, the transmission couldn't be shifted out of gear without turning the overdrive off. It was all too easy to accidentally turn the overdrive on when shifting, thereby "locking" the car in the last selected gear. Also, due to a fluke in the gear ratios and the way the engine ran, it was actually possible to go somewhat faster in 2nd gear with the overdrive engaged than it was in "high" gear! In certain models of Ramblers with the larger engine and the manual transmission equipped with the overdrive, young men of inquiring minds found that it was possible to exceed 120 mph using this "undocumented feature."

Found your blog after Randy Cassingham of "This Is True" linked to this video to explain the title on one of his articles. Don't have the time to read everything now, but I *will* be back... looking great so far! BTW, if you don't read "This Is True,", you should... very informative and thought-provoking.

When I was about 5 years old I lived in Detroit Lakes, Minnesota. My Dad & Mom used to drive to Kenosha, Wisconsin. To the Nash-Kelvanoter factory and pick up 1 new car and bring it hometown the dealer, who also was an appliance dealer. This went on for about a year. So I remember the cars! Pretty phonenol